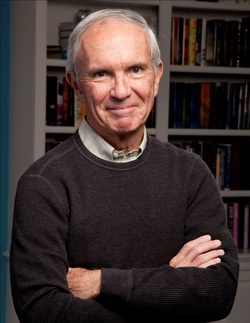 Thomas W. Lippman is a Washington-based author and journalist who has specialized in Middle Eastern affairs and American foreign policy for more than three decades, and is an experienced analyst of Saudi Arabian affairs, U.S.- Saudi relations, and relations between the West and Islam. He is a former Middle East bureau chief of the Washington Post, and also served as that newspaper's oil and energy reporter. Throughout the 1990s, he covered foreign policy and national security for the Post, traveling frequently to Saudi Arabia and other countries in the Middle East. As an independent writer, he travels often to the Middle East.

Lippman is the author of numerous magazine articles, book reviews and op-ed columns about Mideast affairs, and of eight books: Understanding Islam (1982, 3d revised edition 2002); Egypt After Nasser (1989); Madeleine Albright and the New American Diplomacy (2000);  Inside the Mirage: America's Fragile Partnership with Saudi Arabia (2004); Arabian Knight: Colonel Bill Eddy USMC and the Rise of American Power in the Middle East (2008); Saudi Arabia on the Edge (2012);  Hero of the Crossing: How Anwar Sadat and the 1973 War Changed the World (2016); and CRUDE OIL, CRUDE MONEY: Aristotle Onassis, Saudi Arabia, and the CIA (2019). Arabian Knight was  honored as the best biography of 2008 by the Independent Publishers Association.  He is also the author of the essay on Saudi Arabia's defense strategy and nuclear weapons policy published in 2004 by the Brookings Institution Press in The Nuclear Tipping Point, a book on global nuclear proliferation, of the chapter on Saudi oil security in Crude Strategy: Rethinking the US Military Commitment to Defend Persian Gulf Oil (2016).; and of the chapter on U.S.-Saudi relations in The Middle East and the United States (6th ed. (Routledge 2018).

A frequent television and radio commentator on Mideast developments, Lippman has appeared on CNN, MSNBC, the BBC, CNBC, ABC and Fox News, and on radio stations in New York, Boston, Phoenix and San Francisco, as well as on television stations overseas. Several of his lectures on Saudi Arabia have been televised nationally by C-SPAN.  He has also been a consultant on Middle East affairs to several U.S. government agencies, including the Air Force and the CIA. He comments frequently on Middle East affairs on the Lobelog.com newsletter and at MEI.edu.

He is currently a nonresident scholar at the Middle East Institute in Washington, where he is a frequent media contact on Saudi Arabia and U.S. – Saudi relations.